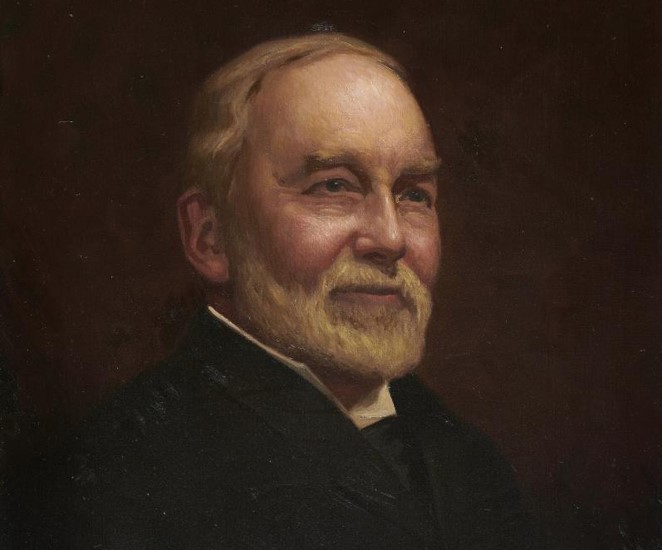 Arthur Spooner was that rare being, a local professional artist with what only amounted to a local reputation but whose steadfast application to art allowed him to earn a good living.

He painted until almost the day he died in 1962 at the then unusually old age of 89.

He was also prolific.  It is no exaggeration to say that I’ve seen hundreds of his pictures, usually oil paintings on canvas or smaller studies on board.

The latter especially can be a real delight. His lively, rapid brush strokes capture the effects of filtered sunlight that can only really be achieved by painting out of doors.

Many were to later serve as models for larger pictures in the studio but so many of them are there, it is no surprise to learn that he enjoyed the opportunity for expression and experiment, a welcome relief from the more conservative, ‘finished’ pictures his patrons demanded.

Landscape oil sketches have an illustrious history.  Examples by John Constable are invariably breath-taking, but marvellous flashes of brilliance are to be encountered in the examples of other, far less distinguished 19th century artists.

Arthur Spooner’s best loved picture is undoubtedly ‘Goose Fair’ of 1926, in the Castle. It is a brilliant evocation of spectacle and atmosphere.  A ravishing picture it may be, but I can’t help wondering what Joseph Mallord William Turner - had he still been alive - would have made of it?

It is difficult to imagine now but in the days before it translated from the Market Square to The Forest, the Fair was very different.  Spooner’s picture is so successful because it captures not only atmosphere but something of the senses being overwhelmed by all the sights and sounds, the drama and the decadence.

Arthur Spooner was born in Nottingham, as were his parents.  His father was a hosiery warehouseman.

By the age of 20 he had chosen his career.  Living at 92 Ortzen Street near Alfreton Road with Maud, his wife and baby daughter, in the 1901 Census he is described as  ‘Lithographic Artist’.  Nottingham was then a major centre of the printing industry with many leading firms such as Forman’s and Stafford’s of Netherfield specialising in pictorial work, in the case of Stafford’s especially railway posters, now regarded as some of the best 1930’s classics of their type.

By the time of the next Census of 1911 Arthur Spooner had dropped the term ‘Lithographic’ and was described simply as ‘Artist’.  By then the family had moved to 1A, Southey Street, here they were to remain for many years before he could afford to move to the more salubrious and spacious 18 Harlaxton Drive off Derby Road.

Some of his early work shows the influence of the late Pre-Raphaelites, for example John William Waterhouse and it is sometimes not untouched by the prevailing Art Nouveau.  These scarce early works depict nubile nude girls in watery landscapes, their modesty preserved by more often than not bearded irises.  Such work hints at the bolder art of some of Spooner’s greater contemporaries.  “The Water-Flower” and “The Fairest Flower” are examples, shown at the Royal Academy in 1913 and 1920 respectively.

Arthur Spooner was no virtuoso of the palette but he was a competent painter of figures, teaching the Life Class at Nottingham School of Art, also animals, especially heavy horses and his subject of choice the Landscape.

From his spacious city centre studio on the top floor of Market Chambers he had a grandstand view of life in the Market Square.  In all, he sent 17 pictures to the annual Royal Academy Exhibition between 1907 and 1941.  He never sought election to the Royal Academy but was a member of the Royal Society of British Artists.

During the 1920s and ‘30s his reputation as ‘Nottingham’s artist’ found increasing numbers of the great and the good - the Duke of Portland many other famous men and women and civic dignitaries, as well as businessmen – making their way to the South Parade studio.

Many of these portraits still hang in town halls, universities and boardrooms. There was, no doubt a feeling that it would have been ‘daft’ to commission a fashionable (and expensive) London portrait painter if all that was required was a good likeness, carefully executed with reasonably skill but not flamboyant or overtly ‘artistic’ or, even worse, ‘Modern’.

Most of these pictures are unsurprisingly dull and I am no longer surprised when people sell portraits of grandparents, aunts or uncles who may have been Aldermen, Mayors or Mayoresses.

Arthur was not the easiest interviewee judging by contemporary newspaper reports.  He was clearly wary of the press, as artists are wont to be.

On his golden wedding anniversary when a local reporter enquired how 50 years of married life had been, he replied, perhaps ill-advisedly, with a one word answer: “OK”.

Towards the end of his life he was distressed to see the beauty spots of Clifton and Wilford, two favourite haunts for painting, destroyed by new housing developments.  These were the usual locations where in his younger days, the little landscape sketches painted with such bravura, were made.  “It’s a wicked shame, I don’t know what they (the Council) are thinking about”.

Arthur Spooner was a man who understood equally well his clients and his own limitations. Turning away from the impossibly beautiful dryads and naiads of his early pictures he came to prefer the lucrative fees to be earned from portraiture, untroubled by any desire for posthumous fame.

This pleasantly benign portrait by Arthur Spooner of a gentleman in the prime of life serves as a counter point the dour expression of most of his sitters, all too conscious of memorialising their gravitas.  It will be sold by Mellors & Kirk on 18/19 September.

The wealthy sitter, James Snook (1831-1910) of Penhryn House, The Park, founded the eponymous firm of textile merchants and wholesale clothing manufacturers in Hounds Gate in 1865.

A highly successful business, Snook’s warehouses on opposite sides of the narrow road survive as does the eye-catching ‘Bridge of Sighs’ between them, which was built by his son Herbert in the 1920s.