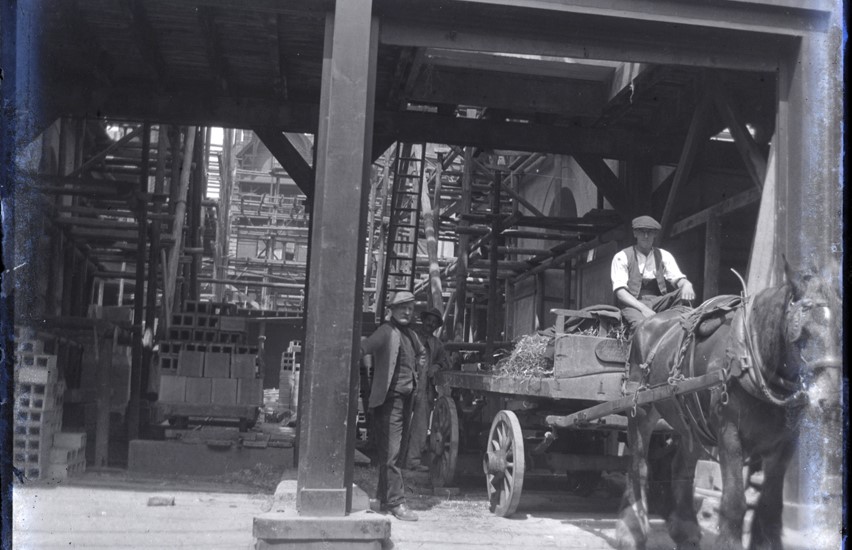 Just before the lockdown a visitor mentioned he had stumbled across several photographic glass negatives of “Boots” while clearing the attic of a house following the death of a friend.

They are an important record of the most interesting decade in the company’s history.  These are no amateur photographer’s snapshots but professional progress photographs of the iconic D10 and D6 buildings and much else of the huge site between Nottingham and Beeston that it had acquired in 1926.  There are many images of employees only recently arrived in their spacious and spotless modern workplaces. There are also photographs of the sprawling Island Street, Nottingham site with its Victorian buildings that were Dickensian by comparison.

In its conception and construction D10, or the ‘Wets Building’ of 1930-2, and now listed Grade I by Historic England is a masterpiece of modernism.  It is that most rare thing: a 20th century British industrial building of international importance, as I realised on a visit many years ago.

Viewing the images of it and the almost as important D6 or ‘Dry Goods’ factory from 1935-8 evokes something of the excitement and pride surely experienced by those first workers.

The purpose of modernism can be summarised as efficiency and optimism.  Such a bold and magnificent building as D10 for example could claim, like that other but much earlier ‘prodigy’ building Hardwick Hall to be “more glass than wall”.  The area of glazing was approximately 5 acres.

The efficiency of the new factory allowed the company to instigate a 5-day week without reducing wages thereby giving Boots a claim to have invented the notion of the weekend.  But the optimism of the mid-30s was soon overshadowed as, in W H Auden’s words “the low dishonest decade” drew to a close.

Some of the most intriguing photographs record preparations for war with Nazi Germany.

Factories were camouflaged, air raid shelters built, windows boarded up, staff supplied with PPE and enlisted into the company’s inhouse emergency services, the LDV (Local Defence Volunteers) or as wardens in the ARP (Air Raid Precautions).

On a happier note there are about 15 informal images apparently unconnected with Boots that capture the uninhibited fun of Goose Fair in the Market Square and the Exchange Buildings under construction.

War on the home front for those employed in vital industries was arduous and often dangerous.  Factories and large industrial sites could only exist in urban areas.  Workplaces and homes were therefore an obvious and ever-present target for the German air force, the incendiary bombs of which could and did destroy factories and homes without distinction.

The D10 and D6 factories still look surprisingly modern, a testament to the originality of the architect-engineer Sir Owen Williams, but the state-of-the-art technology and attire of the staff is frozen in the ‘30s, as are some of the social norms of the period.  Did anyone at the time see anything wrong with the demarcation of the canteen into sections for “Girls” and “Men”?

D10 was opened by founder Jesse Boot’s widow Lady Boot who, in a brilliant take on the launching of an ocean liner caused a large bottle of Eau de Cologne to be smashed on the building’s main staircase by the passing of her hand through an invisible beam.  It was most appropriate nod to a future of excellence founded on scientific research and development.

Posterity lends to 19th and 20th century progress photography such as these amazing images a coherence and socio-economic importance the preservation of which, vicissitudes, carelessness or simply a lack of space, might at any moment destroy.

It is a timely reminder to preserve and record important structures and company archives of major employers.  Boots in Nottingham, Cadbury’s in Birmingham and  few other British enterprises can claim to have benefited the lives of countless millions of families over many generations because of the integrity – the “purity” – of their products, which is why they remain as trusted today in the era of Covid-19 as when Jesse Boot resolved to become “Chemist to the nation”.