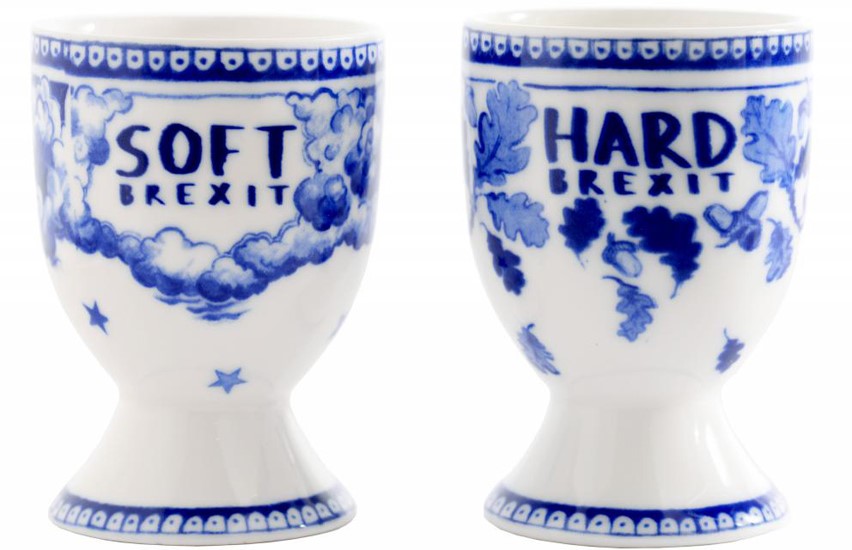 Excited over Breggsit? For 300 years English pottery has often displayed a mischievous, independent streak, a liking for satire and an uneasy relationship with politicians, priests and princes.

Pottery of this type, whether figures, mugs, bowls or dishes represents wit and humour of the British potter at its most revealing.  That’s why I couldn’t resist buying these Brexit eggcups from the British Museum gift shop last week.  Of blue and white transfer ware the decoration is at first sight typically 18th century.  That makes for a clever juxtaposition with the very up to date message.  Look closely and you will see the pattern is symbolic in a way that 18th century blue and white, such as the famous Willow pattern is not.  The Hard Brexit eggcup has an oak motif and star shooting off in one direction or else plummeting to earth.  Soft Brexit is surrounded by gathering storm clouds and two birds circling each other.  They were produced to accompany the recent British Museum exhibition “I Object: Ian Hislop’s Search for Dissent”.  It was a fascinating exploration of the history of dissent and the questioning authority.

It is important to distinguish between this type of subject ware, in which the potters are clearly having fun or objects that instead have a sombre or poignant message, for example the Tower of London poppies and the vastly more numerous class of commemorative ware.  The former are imbued with a sense of something that is either profound or light-hearted.  Royal Wedding mugs by contrast are dull and dead and have nothing whatever to recommend them, yet still are in demand even in this the era of decluttering.

With every royal happening useless and garish bric-a-brac will appear, invariably in limited edition and sold everywhere from the Buckingham Palace gift shop to the corner shop.  It would be interesting to study how such ‘kitsch’ that plunges the depths of woeful design seems almost a summation of all that was ill considered in the decade of its creation.

The Brexit eggcups can be viewed as only the latest example of ceramic folk art or peoples’ pottery. Time will tell whether serious collectors feel the same but 18th and 19th century political pottery is keenly sought.  Fortunately, there is a great variety to choose from because potters in general were not shy of dissent.

In the 18th century radical MP and journalist John Wilkes was a popular subject as was John Wesley the founder of Methodism because many potters were what was termed (religious) dissenters, usually Methodists.  The most famous of all, Josiah Wedgwood (1730-1795) was a Unitarian and strong abolitionist.  He made and distributed free a medallion to raise awareness of the evils of slavery. It featured a kneeling slave in chains beneath the words AM I NOT A MAN AND A BROTHER.  By the early 19th century fiercely anti-Napoleon jugs and other ware appear, Lord Nelson’s death at the Battle of Trafalgar was universally mourned and commemorated in pottery and on the death of King George III the potters took the side of Queen Caroline whom they felt had been too harshly treated for her highly colourful lifestyle, when her husband, the Prince Regent, King George IV had not exactly covered himself in virtue.

A little later the potters were almost uniformly in favour of the Reform Bill and free trade.  By the late Victorian period some interesting pottery was produced by Staffordshire firm Wileman & Co.  The Intarsio range featured novelty teapots in the form of political characters, in a limited palette of cream, green and brown.

There were revivals during both world wars when potters demonstrated their patriotism making everything from ‘British Bulldogs’ draped in the Union flag to a chamber pot with Hitler’s portrait in prime position.

As the tortuous Brexit saga twists and turns towards March 29 I won’t be the only one to be grateful for that gentle and distinctly British good natured sense of humour expressed in, of all things an eggcup!