Harry & Edward A Lesson from History 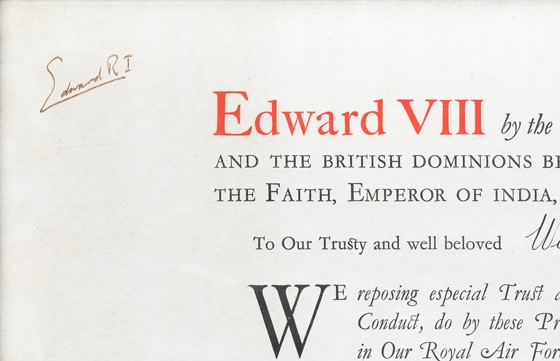 Harry and Edward: a lesson from history?

Have we witnessed a re-run of the abdication crisis of 1936?  There are similarities: the relinquishing of royal duty, a life of exile, the American wife, but it is nonsense to compare Harry and Meghan, a likeable young couple but realistically never to be king and queen, with that deeply flawed pairing of the playboy prince Edward VIII and frankly sinister, Wallis Simpson.

By the time he abdicated in a famous radio broadcast to the nation in December 1936 Edward, still uncrowned had been king for less than a year.

Many souvenirs, for example those ghastly coronation mugs and plates had already been potted and stamps printed but only a tiny number of UK coins had been minted.

A gold sovereign, one of only two still in private hands changed hands recently for £1million, the highest price ever paid for an English coin in a sale brokered by the Royal Mint.   Mellors & Kirk sold an almost as rare Edward VIII brass threepence a few years ago for £24,000.

Neither are attractive not least because Edward VIII had firm views on both the design and how he wanted to be portrayed on the coin of the realm.

Whether royalist or republican, or even if disinterested in all things royal, only the hardest of hearts could not but have felt sympathy for the queen, the couple and their families over the last couple of weeks.  It was only three years ago that Prince Harry introduced his fiancé to the people when he honoured Nottingham by their first joint royal appearance.

The result was instant and worldwide adulation, yet now they are to be freed from the gilded cage of royal life to hopefully find happiness and that degree of privacy which so eluded Harry’s tragic mother. The media has not escaped blame but are we not all to blame, including the couple themselves?

As soon as their ‘manifesto’ appeared online commentators were drawing parallels with the last time a British prince married an American divorcee.

In 1936 Wallis Simpson was by common consent considered unfit to join the royal family because she was divorced.  The people blamed her for causing the abdication crisis.  To them Mrs Simpson was a femme fatale - surely the most unlikely one imaginable – because she ‘stole our King’.  In those deferential times most ‘ordinary’ people were outraged.

As a young, attractive Prince with a modern, unstuffy personality Edward was a confident charismatic figure in sharp contrast to his parents, King George V and Queen Mary who seemed to belong in the 19th century.

History would soon show how in only a year or two the ‘spare heir’, Edward’s brother King George VI and Queen Elizabeth would become the most loved of all previous British monarchs.

The British have always pursued a curious relationship with the royal family.  We want them both to be ‘only human’ like ourselves but yet still embody the magic of majesty as if they are anything but that.  It is a subconscious vestige of the divine right of kings.  It is as if they have to be like us but at the same time lead blameless, regal lives.

Ever since World War One, the royal family has performed a balancing act trying to keep a lid on shifts in this anomalous relationship that is the foundation on which the monarchy stands, or falls.

I can think of no other institution that is more aware of the lessons of history than the British royal family during the second half of the 20th century.

The crown’s relationship with the people is both its most valuable asset but also its most dangerous threat.  For this reason, should its ‘loose cannons’  make money on the side, have terrible friends or, worst of all, arm twist politicians they will be sidelined

A few days ago one national newspaper featured side by side a photograph of Edward and Wallis taken in 1966 and a recent picture of Harry and Meghan. Edward looked glum as he mostly did in later life whereas Harry was beaming.  Both wore dark blue suits, the two women in plain bright yellow dresses.  The editor’s message needed no words.

Edward never forgave his brother for not allowing Wallis to be styled ‘HRH’.  Princess Diana forfeited the same distinction on her divorce, but Harry and Meghan will continue to be Their Royal Highnesses and have merely undertaken to ‘park’ that still correct style of address.

Soon to go under the hammer at Mellors & Kirk is a document signed by Edward.  His signature is not rare as he was found of signing his autograph, greetings cards and photographs of himself when a Prince, or later as the Duke of Windsor in exile.  But this example, the commission of an RAF pilot officer, is rare because it is one of the few signed during those tumultuous months of Edward’s brief reign.  It is signed ‘Edward RI’, the letters standing for Rex Imperator or King-Emperor.  The document is interesting because its radical new design reflects Edward’s taste but the archaic wording is unchanged, as Edward is described as of “Great Britain, Ireland and the British Dominions beyond the seas King, Defender of the Faith, Emperor of India”.

Edward, who died almost 50 years ago continues to enthral, for being one who ran away from his duty, his odd obsession with Wallis Simpson, admiration of Hitler and the Nazi Germany and his pointless non-royal life from that momentous announcement of 11 December 1936.