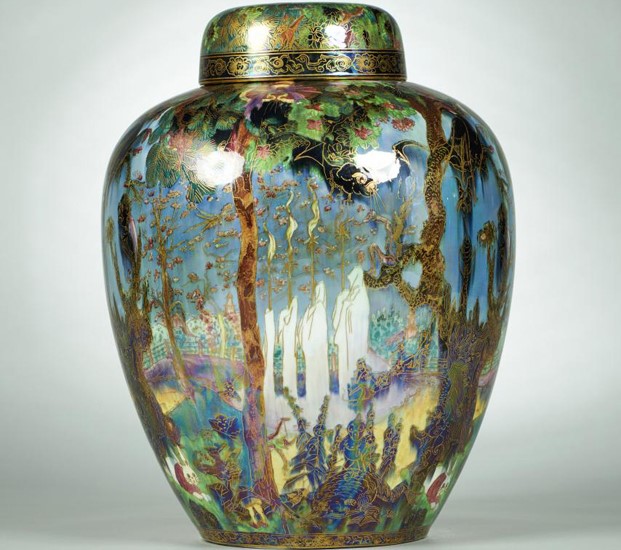 Usually to be seen viewing the auctions with his wife and occasionally making a bid, a friendly local retired gentleman has recently died.

On a visit to the couple’s inconspicuous first floor apartment, necessary for the formalities of probate, I was amazed to see his collection of Wedgwood Fairyland Lustre pottery.

For many the name ‘Wedgwood’ is synonymous with the factory’s most famous and successful product, blue and white Jasperware.  By the early 20th century Wedgwood had rather lost its way and was seeking to adapt its range to the taste of the ‘modern’ world, with mixed results.  Its most prestigious – and highly expensive – innovation at this time was the dazzling Fairyland Lustre, which so vividly calls to mind the roaring ‘20s.

It was actually produced between 1916 and 1941 although increasingly little was sold after 1930 as its market, especially in North America, was destroyed by the Great Depression.

Live online bidding and telephone bidding has transformed the business of buying and selling art at auction.  That’s one reason I enjoy more than ever getting to know those who turn up to view the sales in person, and see for themselves the endless variety of objects and art to be found in Salerooms across Britain.

I enjoy meeting the many collectors who like nothing better than imparting their knowledge, gained over many years and not without a few perhaps costly mistakes.  As to what they’ve actually got they can, understandably, be circumspect.

In the case of Fairyland Lustre, as the porcelain equivalent of a Rolls Royce, for a time price didn’t seem to matter but the fine potting of the vases and bowls and expensive techniques – all that gold – made it ever more uneconomical to produce.

Fairyland Lustre was created by Daisy Makeig-Jones (1881-1945).  A doctor’s daughter she was born on the last day of the year at Wath-upon-Dearne, Rotherham.  She was an independent minded and imaginative child with a talent for art. A distant relative who was a family friend of the Wedgwoods arranged an introduction.

Daisy immediately won the Wedgwood family’s friendship and became an established designer for the firm with her own studio at the old Etruria factory.

Each piece of Fairyland Lustre bears the standard Wedgwood Portland Vase mark found on all the factory’s bone china production.

The brilliance of the shimmering lustrous glazes, so difficult to control in firing, and the lavish gilding are unique.  Rival factory’s attempts to copy the range serve only to illustrate its superiority.

Larger pieces are by far the most valuable especially the celebrated Malfrey pots (ginger jars), vases, bowls and dishes.  The pieces were made purely for display.

The fairly limited range of designs are of their own period but in the tradition of the great 19th century fairy painters from Henry Fuseil to Richard Doyle.  Lionel Lambourne, an expert on Victorian art summed up Daisy’s interpretation of legends and myths involving all manner of ‘little folk’ as giving “the minuteness of Fairyland apposite expression in a ceramic medium.”

The most valuable of all Fairyland designs, probably because relatively few were sold as they were amongst the most expensive of the range is “Ghostly Wood”.  A rather spooky pattern with three white spectres in the midst of an ancient woodland.  The collection includes two examples of this, a Malfrey pot of the largest size and charger (large dish) which are estimated at £15,000-20,000 and £8,000-12,000.

I particularly like her “Woodland Elves Boxing Match” design.  Improbable yes, but  Daisy herself remarked “in Fairyland all things are possible”. Quite so.