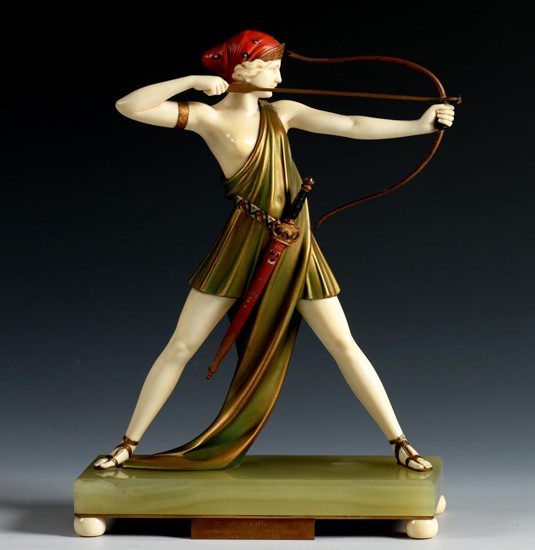 The long-awaited ban on the sale of practically all ivory works of art in the UK is now law.

The Government has said that the Ivory Act will come into force in late 2019.  Owners of pre-1947 objects made of, or incorporating ivory, have only an indeterminate few months left if they wish to sell.

Objects that only a year or two ago regularly sold at auction for tens of thousands of pounds will be rendered worthless.

It is surprising how ubiquitous the use of ivory had become by the 19th and early 20th century home.  This once precious material was being used for such ordinary objects as hairbrushes.

With the ban fast approaching, I encounter almost daily confusion on what the new law will mean.  Objects made before 1947 but containing less than 10% (by volume) of ivory, or portrait miniatures painted on ivory that are at least 100 years old, will still be saleable if the seller registers the items online with the Animal and Plant Health Agency.  A fee will be payable.

Certain musical instruments that contain ivory and antiques judged by an expert panel to be examples of the ‘Rarest and most important of their type’ will also be exempt.  Apart from these narrow exemptions it will not be possible to buy or sell ivory objects.

This is the reason one owner has decided to consign a superb Art Deco figure of Diana the Huntress which has been owned by his family since new.  The sculpture still retains the original engraved inscription it bore when it was presented as a gift ‘To H Dadd from his colleagues at the Admiralty’, perhaps on his retirement, in September 1930.

The work of Ferdinand Preiss (1892-1943) the best maker of the period, it is completely free from the unsightly cracks that often disfigure the carved heads and limbs of Art Deco sculpture.

It is important to note that after the ban takes effect it will still be legal to own and display (in the owner’s home or a museum) ivory objects such as this.

Preiss and the handful of his less successful competitors who worked in Germany, Austria and France in the 1920s and ‘30s found a ready market in Britain.  The ‘Roaring Twenties’ was the era of extravagance and glamour as the fashionable and newly rich sought evermore hedonistic lifestyles and means to flaunt their wealth.

Many of Preiss’ subjects reflect the disturbing themes associated with National Socialism.  His athletic nude statuettes are redolent of the Aryan ideal and cult of the body.  There is no evidence that Preiss was a Nazi and according to his family he did not sympathise with the all powerful regime, but as a manufacturer of art objects, he had to join the Reich Chamber of Culture, the organisation that dictated what was and was not in the opinion of the Nazis ‘degenerate art’.

If some of his subjects therefore appear ‘suspect’ it’s worth remembering that many Britons and Europeans shared such sentiments and, initially at least, admired Hitler’s leadership.

Department store Waring & Gillow was the one London shop where a selection of Preiss figures could be bought. Its 1939 Catalogue featured several, including ‘Gamine’ priced at 24 guineas (£25.20) or about £1,600 today.

Ferdinand Preiss was born at Erbach in Hesse, traditionally a centre of the craft of ivory carving.  His father was an inn keeper.  After serving an apprenticeship and a period of travel, in 1907 Preiss went into partnership with Arthur Kassler.  In an ill-fated decision, they decided against their original intention of setting up in Lucerne, opting instead for Berlin.  Initially the firm favoured classical subjects.  Following World War One Preiss decided to incorporate ivory with patinated bronze, with breath-taking results.  The figures were mounted on onyx or marble bases and the bronze castings were supplied by a local Berlin art-founder.  As Germany re-armed under the Nazis the availability of bronze was curtailed and many of the later Preiss figures, especially small figures of nude children and girls, are entirely of ivory.

As a carver and successful manufacturer Preiss was a perfectionist.  This is evident in the realism of his carving of the human figure and the meticulous, life-like expressions on the faces of his subjects.  Much of the character of this fastidious man can be seen in his photographs.  A self-aware and demanding colleague, he was always perfectly groomed and dressed.  He was a creation of the old Germany whose reputation and fortune was soon made in the heady days of the Weimar Republic. only to be consumed in the flames of World War Two. Preiss died of a brain tumour and nothing remains of his factory, his stylish sculptures serving as his only memorial.