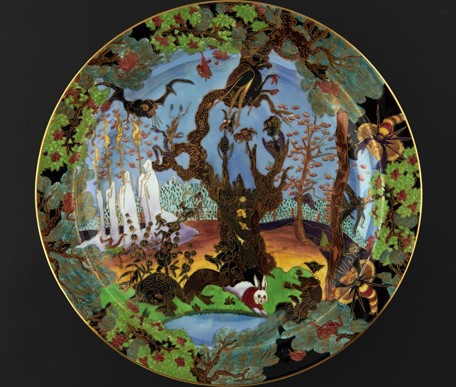 “Too good to resist” sums up the feelings of many of those who saw the breath-taking group of 1920s Wedgwood Fairyland Lustreware at Mellors & Kirk’s June Fine Art Sale.

In the days leading up to the auction I was puzzled by how often I heard those registering to bid at reception, when asked if they had been before, saying they had but not for a “long time”.

Everyone, or so it seems is now au fait with viewing and bidding for auction lots online.  There is a minority, of which I am one, who need to see and handle a work of art or object, however good the image or description.  Auctioneers are responsible for other people’s property so cannot, unlike certain online fashion retailers, have a lax returns policy.

What, I wondered, was special about the forthcoming auction that brought in those infrequent bidders?  It was the abundant and interesting material that, being ‘fresh’, would not flash up as having been offered a year or two earlier in an internet search.

The sellers were especially interesting too.  Ranging from a descendant of a brother of the great Duke of Wellington (1769-1852) to Derbyshire County Council, both of which had consigned many of the most interesting items.

Charm sells and I was not surprised to see a large and lovely Regency period embroidery of a leopard sell for £5,000.  For connoisseurs of useless facts, as late as the 18th century many English people, including the great engraver Thomas Bewick used the term ‘camel leopard’ for the animal we know as the giraffe!  An almost as appealing Swiss carved wood bear of about 1900 found a new home for £8,746.

A collection of 80 fine 18th and 19th century pocket watches from two elderly Derbyshire collectors was a standout attraction but watches were not the only small objects to do well.  The snuff mull of executed Jacobite leader Lord Balmerino (recently featured in Under the Hammer) sold for £3,500.

Every piece of the Fairyland Lustre ware sold, including a Malfrey Pot (large ginger jar) in the desirable Ghostly Wood design, which made £18,740.

The Palace of Westminster oak posting box by A W N Pugin had suffered years of neglect until it was discovered and identified by Mellors & Kirk on a routine home valuation visit.  It went for £5,247, paid by a collector.  The new owner intends to preserve it as it is, rather than try and restore it.

A posting box of another more fanciful kind also sold well.  In the form of a sentry box manned by a watercolour picture of a soldier it surprised most onlookers by taking £6,247.

The £6,000 paid for a 19th century Moscow porcelain figure underlines the resilience of the market for Russian art and antiques.  A beautiful pair of French ormolu and porphyry tazze, which would have been acquired when new by one of the Lords Byron in the mid 19th century will be returning to France, having sold for £16,240.

A mahogany cased precision regulator longcase clock by the distinguished maker Thomas Earnshaw dating from the early 19th century had emerged unrestored from a local house and will enter another, having sold for £16,240.

My personal favourite item in the Sale was a splendid George III silver chocolate pot.  Of beautiful workmanship and bold, baluster design it was made in London in 1792 and made £2,500.

Finally, a great result of £15,000 was achieved for a mid 20th century Dallmeyer ‘Septac’ camera lens that would have changed hands for just a few pounds as recently as 20 or 30 years ago.

The prices realised include the buyer’s premium.