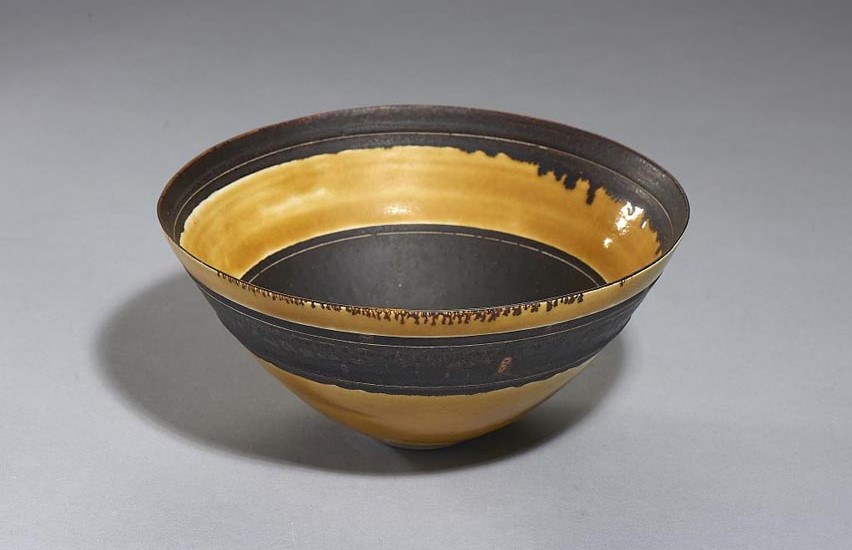 Half a dozen pots bought in Nottingham for a few pounds in the 1960s went for over £100,000 at a recent auction at Mellors & Kirk

It is often said that the greatest art, whether fine art, music or dance appears effortless or simple.  As anyone who has tried will tell you, that’s why it is so mesmerising to watch a lump of clay turn into a pot in skilled hands on the potter’s wheel.  That is especially true of the work of Coper and Rie.  They were highly regarded in their day but are now universally so, which has caused prices to rocket over recent years. I believe that is because their work cannot be pigeon-holed.

Only a handful of contemporary potters’ work has been accorded the status of fine art.  Two living potters who have achieved this accolade are Grayson Perry and Magdalene Odundo and it is no surprise to find that their work is priced to match.  Coper and Rie are also examples of important British art made by immigrants, in their case asylum seekers, who fled Nazi Germany to avoid almost certain death, for she was Jewish and he a conscientious objector.

The potters chose Nottingham to show their work in the 1960s at exhibitions at the Midland Group and there it was bought, each piece carefully selected by a local collector with a keen eye for quality over price.  At the auction two Coper pots secured the highest prices, an elongated form of c1967 which went for £19,000 and a stoneware form with collar dating from around 1965 which sold for £20,000.  The yellow bowl by Lucie Rie which had cost £13 in the ‘60s` made £15,000.

I was fascinated to listen to working potters who came to the view days and who almost lovingly, but certainly carefully, handled the pots enthusing about the sheer difficulty of their making and glazing.

Alan Good who died in 1953 must have cut an interesting figure.  A tycoon who bought and sold companies in the 1930s including Lagonda cars and Brush Transformers of Loughborough was also an art lover, but what he selected had to be both unusual and the best of its type.  That is why his 19th century pedlar doll, which came in its own little showcase some 30cm high, went for £2,500.  Also from the Good Collection an Indian ivory and penwork cottage shaped box, virtually identical to an example in the Victoria and Albert Museum made a multiple estimate of £6,500 despite the forthcoming ban on the sale of ivory objects. The Venetian green lacquered gondola chair of which I had grown quite fond, found a new home for £1,200.

Confounding the popular notion that ‘brown’ furniture no longer sells, a George III burr elm lowboy of unusual small size made a multi-estimate £6,000.

Artists respond to war in different ways, either reflecting its consequences in their work or changing out of necessity.  The famous Cornish painter Henry Scott Tuke (1858-1929) a Royal Academician, lived in a large house on the cliffs outside Falmouth but during World War One the Government banned access to the secluded coves and beaches on the coast near Falmouth because of the port’s strategic importance.  Although Tuke had a studio he was a ‘plein air’ painter whose best work, young men posed on the rocky shore or bathing is imbued with the sparling effects of light in a masterly manner.

Forced into temporary retirement Tuke turned to sculpture, producing only one work, ‘The Watcher’.  Exhibited at the Royal Academy in 1916, only five were cast in bronze of which one turned up at Mellors & Kirk.  The 31cm sculpture on its original ebonised wooden plinth went for £15,000 to a bidder in the south of England.

Max Beerbohm (1872-1956) was a well-connected artist, famously witty writer and caricaturist.  Born in London, the son of Lithuanian immigrants his meticulous drawings are instantly recognisable.  Although prolific his 1924 ‘Civilisation and the Industrial System’ was the first that Mellors & Kirk have sold. Set before a heavily barred window, poor ‘Civilisation’ can no longer bear the sight of her now hideously obese and ugly husband (the ‘Industrial System’). Originally owned by Laurence Cadbury, the son of the head of Cadbury’s who collected Beerbohm caricatures the 38 x 30cm drawing will remain in Nottinghamshire, having been bought by a local man for £4,000. It is nearly 100 years old but its message has lost none of its relevance.  On a happier note, the bright red Austin J40 child’s pedal car, which was one of the most coveted items on offer sold for £1,100 (all ‘hammer’ prices quoted subject to 24% buyer’s premium).