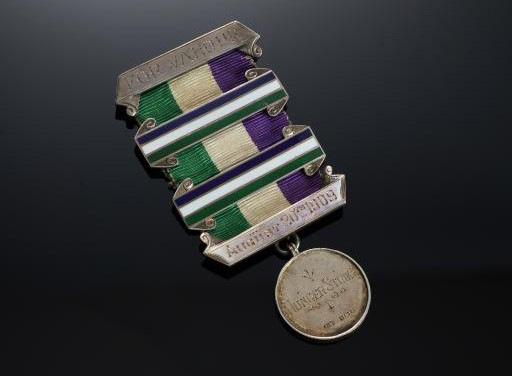 Last week as a succession of carriers and vans collected many of the auction lots won the previous week by bidders worldwide at The Auction House we were busy receiving and researching those for the next Sale.

But seldom has there been a time in living memory that is both so exciting and frustrating.

That is true also of the art market.  Auction prices realised for great objects with a story soar to heights undreamt of whilst some eminently useable and well-made solid antique furniture can be picked up for little more than the price of a bag of groceries.

Some of the most interesting of items from the auction have been featured over recent weeks.  Best of all was the hunger striker’s medal of suffragette Selina Martin (1882-1972) awarded by Emmeline and Christabel Pankhurst’s Women’s Social and Political Union in 1909.

Having been the centrepiece of the recent exhibition Represent! Voices 100 Years On at the People’s History Museum, the Manchester museum requested a delay to Crowdfund an appeal for its purchase. I expressed the hope (in this column) that it would become the first major suffragette item in the National Justice Museum here in Nottingham.

It was not to be. Instead this highly important object with a mini archive of letters and documents was bought by a benefactor of the National Gallery of Victoria, Australia.

Is it not time to question seriously the priorities and inefficiencies of museums and galleries in the UK? Many of the institutions themselves appear only to recognise cuts to funding yet waste resources on ill-considered and often ineffectual attempts to appear relevant before a public that is far more perceptive in matters of fine art and history than ever before.

World War One fighter ace Captain Albert Ball (1896-1917) is one of Nottingham’s greatest heroes.  His Victoria Cross is a great treasure of the Sherwood Foresters.

The broken propeller from the ‘plane in which he crashed in Wollaton Park is a truly evocative relic, not just of him but as a metaphor for a generation of young men who served in the Great War.

It sold for £3,200 but rather wonderfully was bought by Ball’s brother’s granddaughter, Caroline Wood.  Good for her say I, but I’m not so sure what he would have thought as, when local man Bill Ash, politely asked for a piece of the wreckage as a memento, Captain Ball retorted “You can have the b….. lot!”

Other highlights of the sale included a beautiful small French silver gilt beaker made in Strasbourg in the 1730s.  Pre-revolutionary French silver of such quality is highly prized and this example sold to a French bidder for £5,500.

Another small silver lot to do well was a group of ten enamelled table place name stands.  Hallmarked at Chester in 1906 & 07 they went for £4,200.

At only 14.5cm high a Japanese cloisonné enamel vase or tea canister of about 1880-90 sold for £16,000.  Unlike most of his work it was unsigned but unmistakably by the greatest exponent of the art Namikawa Yasuyuki (1845-1927) whose workshop was in Kyoto.

Of his best work he modestly, but truthfully observed “If my work will not declare itself to be mine, then the marking of it will do no good.” That’s not a bad maxim for artists, potters and crafts people of today.

One of the Sale’s surprises was a little oil painting of a noblewoman. It has long been thought to be a portrait of Hortense Mancini the Duchess of Mazarin (1646-1699) in the guise of Sophanisba.  In the 24 x 18cm picture Sophonisba is portrayed as a beautiful young woman in an opulent dress, richly adorned with pearls and is shown as she is about to drink poison from a gold cup, rather than be captured and paraded as a Roman trophy of war.

The unknown artist was from the circle of Dutch painter Caspar Netscher (1639-1684) and the panting, which had some restoration, sold for an above estimate £9,500.

Prices realised do not include the buyer’s premium and VAT (24%).