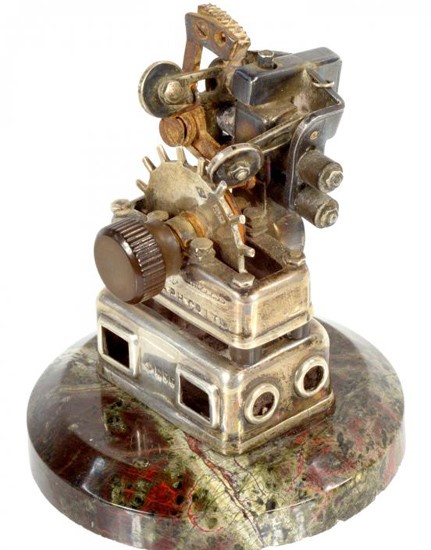 Most boxes such as the small black cube shaped example that turned up at Mellors & Kirk last week will be found to contain nothing more exciting than a silver child’s mug or maybe an egg cup, toast rack, or some other equally useless and long forgotten gift.  At first sight the oddity inside seemed strangely sinister, a device that might well have been dreamt up for an early sci-fi movie, or perhaps it was a bizarre gadget straight out of the mind of H G Wells, author of the influential 1895 novel The Time Machine.

The truth, as so often happens when you delve into history, is extremely interesting.

Standing all of 8cm tall the little nickel-plated brass and steel machine is something very special, for it is a model of Marconi’s Disc Discharger.  As the label proudly proclaims, it was “The first means of producing musical notes in the transmission of wireless telegrams”.  What’s more it was one of the 200 presented by Marconi himself to the 200 delegates that attended the important International Radio Telegraphic Conference in London in 1912.  Only a handful are still known to exist.  Guglielmo Marconi (1874-1937) was the brilliant maverick inventor of whose many achievements the most important was making the first transatlantic radio transmission.  This took place from his ram shackle wooden radio hut at Poldhu on the coast of the Lizard, Cornwall in December 1901.  For this reason the model is mounted on a piece of beautiful serpentine rock from the Lizard peninsula.

A visit to the Communications Gallery at the Industrial Museum at Wollaton Hall leaves you in no doubt that Nottingham was an important centre for the telephony, radio and electronics industries.  The L M Ericsson Company and later Plessey, in all its subsequent manifestations, at Beeston were major employers from almost the earliest days of the technology in the mid 1890s.

The International Radio Telegraphic Conference was held in the immediate aftermath of the Titanic disaster.  But for the stricken vessel’s distress signal both tapped out and received on Marconi’s equipment, there would have been no survivors.  The Conference saw the signing of the International Convention that allowed the exchange of radio telegraphs between countries.  A Nottingham lad and Marconi employee, Harold Thomas Cottam, who was only 21 at the time was the person on duty in the radio room of the RMS Carpathia, and it was he who heard the distress signal and raised the alarm.  It was a remarkable stroke of luck because he was off duty at the time and about to turn in, but had left the radio switched on to listen to the news.  A few years ago I was thrilled to meet his son the late Mr Cottam who lived in the Riverside flats and  for whom Mellors & Kirk sold a rare photograph of Harold, in his uniform with an ‘M’ on the cap.  Although unsigned it realised over £1000.

After the Conference Marconi and his wife entertained a group of the delegates and their wives to a lavish dinner at Claridges Hotel in Mayfair.  The next day they conducted them around his Chelmsford factory, followed by another grand dinner at the Savoy Hotel.  It was at this dinner that the gentleman guests were presented with the model and their ladies received a silver scent bottle.  Except the model is not quite what it seems.  It is in fact a cigar lighter, although there is no clue to its purpose on the lid of the box.  This makes it also of interest to collectors of cigarette lighters or ‘Smokeiarania’.  It is estimated at £500-700 and goes under the hammer at Mellors & Kirk on 29th November.

It was characteristic of Marconi, who understood the importance of making a good impression, to commission a London silversmith, Alfred Foster, to create such a unique momento for his audience of VIPs.

With his ‘Atlantic Leap’ Marconi can truly be said to have been the first to ‘shrink’ the world and his influence is ever more apparent in our own day.  Anyone queuing even for a few seconds  will be transfixed by their phone.  Many are perhaps reminiscent of H G Wells Eloi people of the future.   Maybe Elon Musk with his ambition to ‘shrink’ space travel is Marconi and Wells’ successor.

Time and again I have been amazed how often coincidence has played a significant part in uncovering the history of the objects that appear in auction houses.  Just a few weeks ago I visited the small but wonderful Museum of the History of Science in Oxford.  Mellors & Kirk bought some of its beautiful showcases many years ago when the museum got rid of them because what they had contained had become virtually priceless.  Since then the museum has been given Marconi’s own historic radio apparatus and a host of other important early material by the Marconi Corporation.  I was fascinated to see on display amongst it all another of these lighters.  Whatever it makes at the auction it is definitely going to be one of the top ten items I have discovered this year!