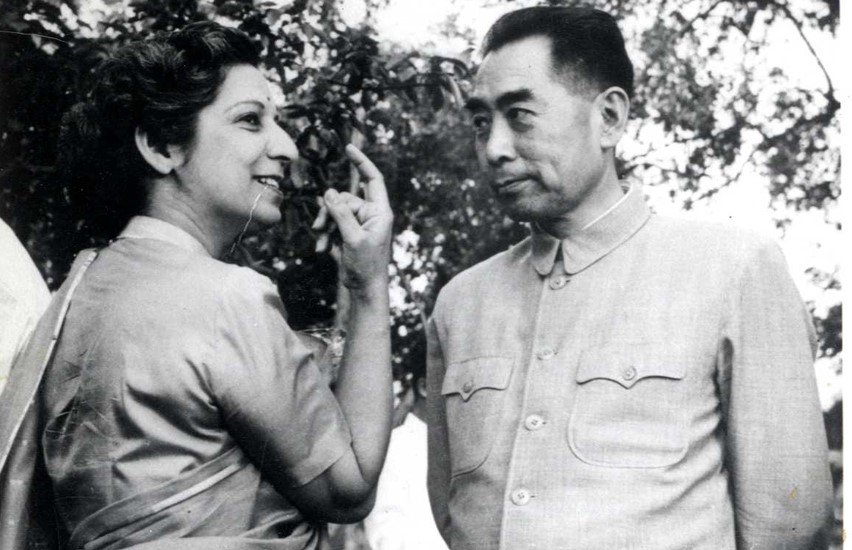 Jewels and mementos of the amazing lives of a couple who were feted at home and abroad to be sold at the Auction House on 20 September. Nigel Kirk looks back at the heady days of the birth of India.

I could hardly believe my ears when I asked the owner whose they originally were “They belonged to Rajan Nehru” was the reply.

Glamorous, modern and certainly ‘spirited’ as she was once described, Rajan Nehru and her husband the diplomat Ratan Kumar Nehru were members of India’s ruling elite family.  In their respective roles they were invaluable in helping to forge good relations with countries around the world, most notably China as India took its place on the world’s stage as an independent nation.

There are silver candlesticks and dishes, rings, an emerald necklace and pearl and diamond bracelet, all collected on their travels and in countries to which Ratan, a diplomat, was posted.  In two remarkable photographs dating from the early 1950s a beaming Chairman Mao is clearly delighted as Rajan places a floral garland around his neck.  In an another Chinese premier Zhou Enlai appears entranced by Rajan’s beguiling expression.

As cousins of Jawaharlal Nehru, India’s founding father and the country’s Prime Minster from independence in 1947 until his death in 1964, they were trusted ambassadors, in Ratan’s case literally so, at this critical time.  He ably handled a dangerous border dispute between India and China, which the photographs seem to imply.

The couple’s son Dr Ajay Nehru, who died last year, was a nuclear scientist at Imperial College and subsequently the University of Nottingham.

Rajan Nehru (1909-1994) was the daughter of Sir Kailas Narain Haskar (1878-1953) the ‘power behind the throne’ during the regency in the Indian state of Gwalior.  She was an active supporter of women’s rights, president of the Red Cross in India, active in social work and the all India Women’s Conference, since 1933 serving as the editor of its official Journal.  She was also a member of the Indian National Congress for 30 years and led the country’s Delegation on Human Rights to the United Nations in 1973-74.

Among her jewellery is a beautiful jade ring, very likely acquired in China, perhaps even as a gift from the country’s leaders in the mid 1950s or early 60s.  There is also her stunning Chinese black and yellow silk jacket.  It is reversible and worked with auspicious shou characters.

Ratan Nehru (1902-1981) was the grandson of Nandlal Nehru (1845-1887).  He joined the Indian Civil Service in 1925 and from 1949 served successively as the country’s ambassador to several countries, including China.  He was Foreign Secretary of India from 1952-55 and Secretary General of the Ministry of External Affairs, 1960-63.  The couple were therefore prominent members of the Nehru-Gandhi dynasty and glamorous figures on the international stage.

As we face an uncertain future with Brexit and heightened geo-political tension its worth recalling something of the exhilaration felt in India 70 years ago, remembering the tragedy of the consequences of Partition and the ever present threat of the Cold War.  Political dynasties from the Renaissance to the Kennedys tend to have more than their share of black sheep but Ratan and Rajan Nehru in their skilful, influential way fostered goodwill as the world’s largest democracy suddenly found itself pivotal country for Asian security.