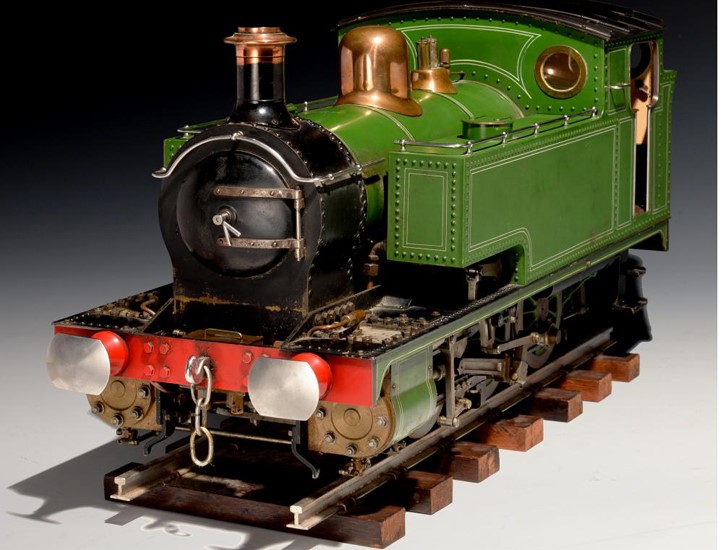 This week showcases my personal selection of the more interesting and unusual items bidders snapped up in the two day Fine Art Sale at the end of last month.

The auction was a first for Mellors & Kirk in that the bidders could bid live online on our website or opt, as before, on the popular Saleroom platform.  I was pleased that many regular and new bidders selected the in house platform, taking advantage of the lower commission.

How different it is to when I started.  In the early ‘80s people would still ask questions at this time of year such as ‘What happens if it snows and people can’t get to the Sale?’  Bidding from people across every continent except Antarctica means such concerns now seem quaint.

The catalogue cover was the particularly colourful jazz age painting Landscape with Figures, 1927.   One of John Armstrong’s most important early and bizarre pictures it was later described by the Royal Academy as one that “Perfectly expresses the spirit of Art Deco”.  Few would disagree not least the private collector who won it with a bid of £16,000.

The Slatcher Collection of 19th century mocha and other British slip dipped ware I described as “Pottery of the servants and working people, the innkeeper and the institution,”  was the subject of keen competition.  Most of the lots sold well over estimate to English and North American bidders.  Lot 300, two small mugs and a jug was typical, the hammer falling at £850.

For pottery from closer to home, Langley Mill to be precise, came a pair of large and impressive Langley Ware vases.  Made in 1887 they were painted by George Parkinson with Haddon Hall, on one in moonlight.  Despite restoration they found a new home at £1,100.

‘Extraordinary’ is a word much over used, but no other can describe the colossal sums paid for several unremarkable objects featuring Lord Byron.  None were personal possessions of the great poet but made in the years following his death for sale to his legion of devoted readers.  Victorian mother of pearl visiting card cases are extremely common and worth well under £100 but for an example set with a small carved profile of Byron a bidding battle ensued, the hammer eventually falling to a telephone bidder from overseas at £5,000.

An ebonised walking cane, its small ivory pommel carved as the head of Byron went for £2,000 and a small Staffordshire Parian Ware (porcelain) bust, c1870, of Byron in Roman garb realised £1,500.

A good example of a 5 inch gauge live steam model tank locomotive dating from the 1960s was a true boy’s toy.  I doubt it had ever been in steam such was the excellent condition.  It fully deserved the £2,000 someone paid.

Coins can be considered works of art and of all the many branches of numismatics the 17th to early 20th century coins of England and the UK are amongst the most hotly contested.  A beautifully toned (to a blue-black colour) was the Victorian silver Crown which sold for £2,500 and a set of four gold proof coins, struck in 1937 made £7,500.  Both were in superb condition.  Clean, or even touch them with un-gloved hands and the value would drop like a stone.

Every Sale contains it share of oddities which appeal to me.  Fortunately there is usually little danger of my succumbing to temptation as many others seem to emerge and bid for them.  A tiny pair of ivory silk lady’s shoes and rare embroidered crimson leather pattens of about 1740 were in frankly terrible condition but are nonetheless uncommon.  They would have been made for a very grand lady.  A similar but much better pair is in the Lady Lever Art Gallery at Port Sunlight and these examples went for £650,  a good price.

Not of great age, a distinctive stoneware (a type of hard earthenware) kettle from the Yixing kilns in China would have been brought home as a souvenir, perhaps as late as the 1980s.  It is just the sort of object you could well see at a car boot sale or in the local charity shop.  This one soared far over the estimate to £1,800.

My pick of the entire sale was a lovely little apple shaped tea caddy, made in England in the early 19th century.  Of fruitwood (perhaps even apple wood) a little of its original red stain finish was still just visible and even the stalk was original, a particularly rare survival.  Much admired, it also went for £1,800.

Expensive watches are luxury goods that people want to see before they buy.  Mellors & Kirk specialises in vintage watches of the 1950s to ‘70s by the great names such as Rolex, Patek Philippe, Heuer and many other makers and they feature in every auction.  A Rolex ‘5513’ Submariner in nicely aged condition led the section of watches, selling at a double estimate £5,000.

All hammer prices are exclusive of 24% buyer’s premium.