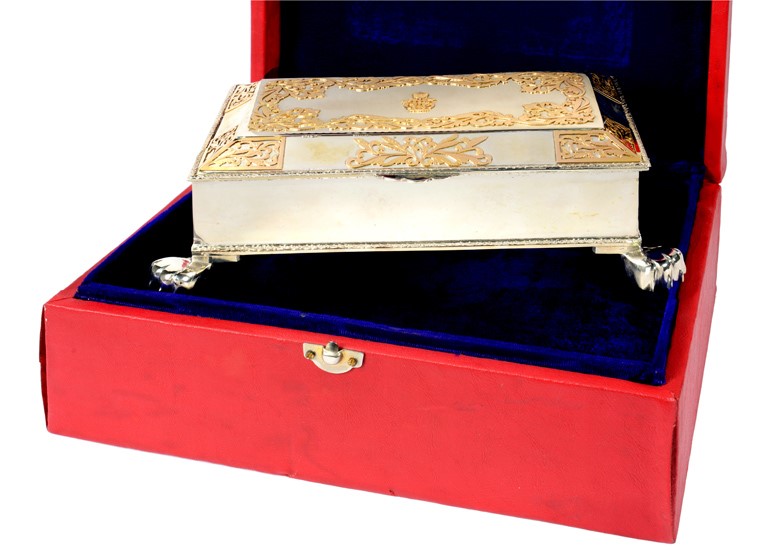 Driving through North Notts on a chill morning in torrential rain recently my thoughts turned to sunnier climes.

That had much to do with the object I had just collected.  On the seat at my side, still in its original plush lined scarlet leather box was a magnificent and heavy gold and silver casket.

It is a relatively recent but especially opulent example from a tradition with an illustrious history – the diplomatic gift.

Presented in person by Haile Selassie, Emperor of Ethiopia (1892-1975) it was a gift to the Governor of Western Australia, Sir Douglas Kendrew.

Of rectangular design the lid is mounted with elaborate pierced gold scrollwork surrounding the arms of the Ethiopian Empire.  It rests on large lion’s paw feet.  Inside is a card inscribed “Made from Pure Silver and Gold at his Imperial Majesty’s Private Treasury.” It also contains a tricolour ribbon in the colours of the Ethiopian flag.  The box is divided into three compartments for cigars and cigarettes.

Haile Selassie was indisputably one of the most mysterious and fascinating historical figures of the last century.  In his portraits he presents an arresting spectacle of a mature man, short in stature, usually in military uniform and heavily bedecked with Orders of Knighthood and medals of honour.

A ruler for nearly sixty years he came from the ancient Solomonic dynasty which is thought to have originated in the 10th Century BC.  Rastafarians believe Haile Selassie was, and is, the Messiah.

Diplomatic gifts often in the form of precious but seldom practical objects include jewel encrusted gold snuff boxes from the courts of 18th century German and French monarchs to the utterly bizarre.  It is unrecorded what Harold Wilson made of his Zambian copper Prime Ministerial briefcase.

Such gifts are intended to symbolise the friendship between rulers and states but one can’t help suspecting that at least some were in reality a best a douceur or ‘sweetener’, or at worst a bribe.

Haile Selassie’s state visit to Australia was the fruition of a warm relationship between Ethiopia and Australia that began in the 19th century when an earlier emperor imported eucalyptus plants.

Haile Selassie was warmly received wherever he went in Australia and the visit made front page news around the world.  He revelled in the attention, being at heart an internationalist, friendly (as far as monarchs can be) and multi-cultural in his approach.  That helped to ensure his popularity and made for appealing images such as that posing with a young kangaroo.  Always a horse lover he was much taken with the quality of Australian horses, which were soon to be seen on parade in Addis Ababa.

The recipient of the casket also deserves his own place in history.  As the Governor of the state of Western Australia Major General Sir Douglas Kendrew (1910-1989) was the Queen’s personal representative.  So popular did he become that his term was extended.  In all, he was in the top job for almost eleven years before he returned to England in 1974.  But this honour came at the end of a career of distinguished military service and sporting prowess that included playing rugby for England in the 1930s.  He was awarded the Distinguished Service Order (DSO) on four separate occasions, a highly unusual and outstanding record which no doubt influenced the decision to appoint him Honorary Colonel of the SAS (Special Air Service Regiment).

Earlier Douglas Kendrew, who seems always to have been known as “Joe”, had a narrow escape when he survived an assassination attempt by EOKA terrorists in Cyprus.

I’m sure this most upright of English establishment figures received his present at the hand of the Emperor with touching courtesy.  From its pristine condition he does not appear to have enjoyed using it.  Perhaps he was a non-smoker.

Exactly two years ago H.I.H. Prince Ermias Selassie who lives in exile in America visited Australia to mark the 50th anniversary of his grandfather’s visit.  When asked by an interviewer whether he thought there was any prospect of Ethiopia becoming a constitutional monarchy, he diplomatically and wisely observed “Crowns change, as societies change.”

The casket bears no hallmark, probably because it was an Imperial commission and is almost certainly of ‘fine’ or virtually pure gold and silver which is seldom employed in objects because both metals are too soft for practical purposes. This somewhat poignant memento of that rarest of  beings, a fully fledged 20th century Emperor, will be sold at Mellors & Kirk’s September Fine Art Sale with an estimate of £3,000-4,000.