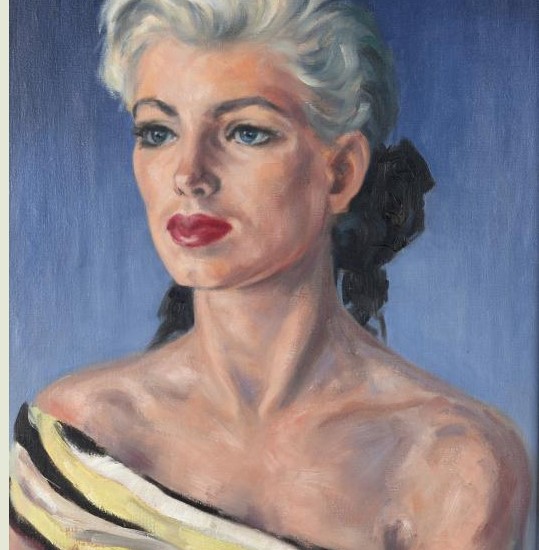 At £30,000 the beautiful tiny embroidered portrait of King Charles I, is in terms of value per square centimetre, one of the most expensive pieces of English needlework ever sold at auction.

The bidding quickly spiralled into the thousands and half a dozen of the world’s foremost collectors and specialist dealers battled it out on the phone and online before the hammer fell to a local private gentleman in the Saleroom who had simply fallen in love with it.  I doubt he would have stopped at any price, but then the best is always the best.

The other portrait was Stephen Ward’s striking picture of Mariella Novotny.  Painted a few months before the Profumo Affair broke in 1963, the picture generated enormous pre-sale interest.  Having read my article online a lady from the South of England contacted me to sell  a painting by John Profumo which, of course,  I hung alongside that of Novotny, the ‘Icon of Sin’ and friend of Profumo’s nemesis Stephen Ward.

On the morning of the sale we were delighted to welcome veteran investigative reporter Tom Mangold (on his 84th birthday) and a camera crew from BBC Panorama.  Tom is making a programme on the Profumo Affair to be broadcast next year.  A friend of Ward, he was with him the same evening that the osteopath, heartbroken at having been shunned by many he considered close, later took a fatal overdose.

Estimated at £500-1000, the portrait sold to another local private collector who, at £2000 won the lot against telephone and online bidders, which was great as neither Tom nor I had any idea who would want it.  After the sale the buyer told us that he and his wife are interested in contemporary 20th century images of the ‘notorious’ and she is hoping to create ‘Wall of Infamy’ in their home, a novel idea.  Tom, who is an old school Fleet Street ‘hack’ as he describes himself is urbane and professional yet highly likeable, although you would possibly think differently if you were  the subject of one of his exposés.

The programme, in which Mellors & Kirk has played a small role will be riveting viewing.  I for one will not be surprised if Ward is shown to have been yet another 1960’s/70s victim of a gross injustice.

The coat from King of Spain and brother of Napoleon Joseph Bonaparte’s baggage train attracted interest from a major French museum and elsewhere, but on the day it was bought by an English collector bidding online from New York, for £17000.

The extraordinary anti-French olive wood walking stick featuring Napoleon as a monkey, carved in Verona in 1799, went for £1500, a triple estimate price despite some condition issues.

The popularity of Nottinghamshire’s only and short lived porcelain factory Pinxton brought out local enthusiasts who snapped up most of the tea cups and saucers, mugs and plates in their charming cottagey patterns.  The £10,580 total will go to charity, including the Salvation Army, which is what the late collector Paddy Steel, OBE, wanted.

The rare 1936 vintage Longines stainless steel pilot’s wristwatch made for the New York retailer Wittnauer to the design of Lieutenant Commander P V H Weems will return to America having been bought by an online bidder for £12,000.   Brought along to Mellors & Kirk’s monthly Retford valuation day, it features a seconds setting system and is of the type developed by celebrity aviator and explorer Charles Lindbergh.

Finally, poignant mementos of Olympic oarsman Chris Davidge (1929-2014) were his three annual Silver Goblets, top prize of  the annual Henley Royal Regatta.  Sold as one lot they were rewarded by a high bid of £1700, far more than they would have been worth but for their connection to the sport.  The value of rowing memorabilia and that of other sports,  such as cycling is rising fast in a field where traditionally the highest prices were reserved for golf, soccer and cricket.  All hammer prices are subject to 20% buyer’s premium.