The Most Exalted Order of the Star of India 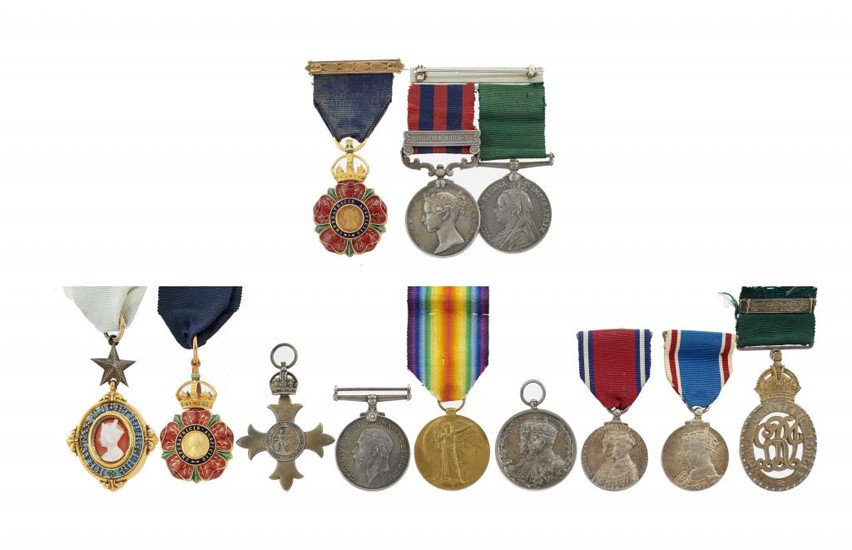 A rare example of the most stunning of all British orders of chivalry ever to be awarded will go  under the hammer in our March Fine Art Sale.  It could sell for £10,000.

The Most Exalted Order of the Star of India was awarded to Indian princes loyal to the British Crown and also particularly distinguished britons in India.  It was instituted in 1861, only three years after the bloody rebellion (long known as the Indian Mutiny) which provoked extreme anger in Britain and brought to an end India’s rule by the East India Company.  Made of gold it is centred by a superb hardstone cameo of Queen Victoria surrounded by the motto HEAVEN’S LIGHT OUR GUIDE, the letters entirely of diamonds.  Not surprisingly few were awarded.

In recent decades criticism of it seems anything remotely connected to the British Empire, has become much more vocal.  Old maps show the Empire’s extent in red, spreading across all continents.  Most people regard Britain’s imperial  past as the hundred years between the Battle of Waterloo and the outbreak of World War One (1815-1914) and of all the peoples and places under British rule none were as magnificent or mysterious as India and its culture.  It truly was the ‘Jewel in the Crown’.

That crown rested on the head of the diminutive figure (1.52 metres tall) of Queen Victoria. Such was her affection for Indians that she caused much jealousy in palace corridors by employing at her side as her confidential attendant Mohammed Abdul Karim, better known as ‘The Munchi’ (1863-1909).  He was one of those who received the Star of India.

This example is exceptional as being sold with it are two examples of the almost as desirable Most Eminent Order of the Indian Empire.  They were awarded to Stewart Ellis Lawrence West

(1890 Simla-Cape Town 1968) Director of Traffic Railway Department (Railway Board) in the Government of India, New Delhi.  A talented cricketer who played in twelve first class matches between the 1913/14 and 1926/27 Seasons for the European's team in the Northern Punjab, West married Vera Violet Muriel van Reinfeld.  The other example was earlier awarded to his father, Charles Henry West (1859 Lahore-London 1946) who joined the Indian (Imperial) Civil Service in 1876.  In 1890 he was promoted to the important position of personal assistant to the Attorney General of India and appointed Assistant Secretary to the Government of India Army Department in 1906.

It is impossible to ignore the evils of racism and oppression with which British and other colonial histories are stained, but as so often with history thought provoking objects such as these beautifully made, precious baubles can be thought provoking in the light of current events.

Whether the enlightenment will be heavenly I will not say – and it is worth remembering the Star’s motto was carefully chosen since it was awarded to Christian, Muslim and Hindu VIPs alike, such as Maharajas and Viceroys.  It is a dazzling badge purposefully designed to reflect the wearer’s status.

A few years after the Order was first awarded, in a political masterstroke, Prime Minister Benjamin Disraeli (1804-1881) had Victoria proclaimed as Empress of India.  An act of supreme flattery in the face of Liberal Party opposition concerns that it was an inappropriate title in a democracy, but the Queen was thrilled.

Disraeli’s Conservative Party won a snap election called by William Gladstone in 1874.  Despite the Liberals winning a majority of the votes.  Disraeli’s father Isaac, a successful author, was the son of an Italian Sephardic Jewish immigrant, who having fallen out with his local synagogue decided that the 12 year old Benjamin should be baptised, because Jews were excluded from participating in politics, the senior civil service or most professions.

Throughout his public life Disraeli faced virulent and highly personal anti-Semitism, much from his own party, but it did not prevent him from becoming leader of the opposition and twice Prime Minister.  He was highly effective and controversial in equal measure.  To him, any thought of resigning from his party, or changing sides would have been out of the question.

This particular Star of India was almost the very last to be ‘Gazetted’, on 1 January 1947 because  India and Pakistan became independent nations in June and August that year.  In some of its grandest hotels and monuments, the railways and cricket, the heritage of the British Raj is celebrated.  This is likely to become more important also to the United Kingdom in the post-Brexit era as the country must capitalise on its historic connection but now on a quite different footing, that of friendship and trade with the amazing peoples of this, the largest democratic country in the world.