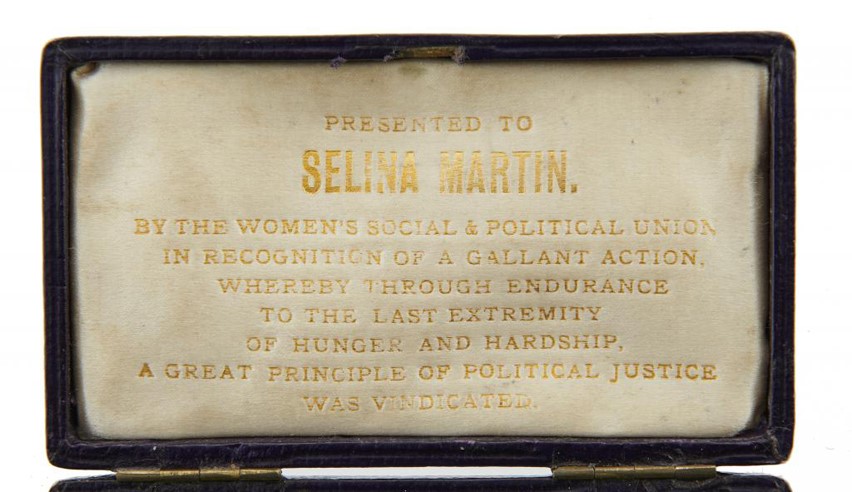 Hanging from its symbolic purple, white and green ribbon at only 22mm it is smaller than most medals. But that won’t stop it selling for £15,000-20,000 when it is auctioned in Nottingham this month.

Will you cast your vote if there is a ‘People’s Vote’ to decide whether to leave or remain, as many demand?  But for the Representation of the People Act, passed a hundred years ago, if you are a woman this question would have been irrelevant.

The Act was the culmination of a long,  bitter, hard fought and frequently violent struggle in the vanguard of which were the suffragettes.

Those jailed for what are deemed to be political offences can expect to fare much worse than common criminals, even murderers or rapists.  The reason is because they have offended society whereas those classed as political prisoners have challenged the governance of a state, whether that is a democracy or a dictatorship.

So it was with the suffragettes.  Very few – less than 100 – were prepared to pay an extraordinarily heavy price for their principles.  They endured police brutality and violent force feeding in prison which amounted to torture.  For many the physical damage and certainly the painful recollection of it was lifelong.

The popular image of the suffragette is of a usually upper class Edwardian lady in a typically ludicrous, elaborate dress such as they might have worn to the theatre, Royal Ascot or Wimbledon, or else a tragic figure such as Emily Davidson who was killed when she threw herself under the King’s horse at the 1913 Derby.

Never before have I handled the famous Medal for Valour of Emmeline and Christabel Pankhurst’s Women’s Social and Political Union.  Next month Mellors & Kirk will sell that awarded to the militant suffragette Selina Martin (1882-1972).

None of the medals are ‘ordinary’ in the sense that only extraordinary events merited it, but even so Selina’s story is truly amazing.

The medal is engraved with her name and the dates of the occasions in 1909 when she was ‘FED BY FORCE’ in prison.  It is struck in silver and was hallmarked at Birmingham in 1909.

Selina was born at Ulverston in Lancashire but when young her parents moved to Lancaster where her father opened a secondhand book shop.  With the medal, which is being sold by a family member, is a major archive of letters from Christabel Pankhurst and other prominent figures in the movement, letters Selina wrote from prison, another suffragette’s letter that was smuggled out of the prison and a notorious letter to her father from the Prison Governor of Walton Jail in Liverpool. Written on 1 February 1910 on official notepaper he tells her father that “… you may rest assured… the unpleasant duties imposed on us here by those militant suffragettes will always be carried out as humanely and considerately as possible.

What is most astonishing is Selina Martin’s spirit indomitable whilst ‘inside’.  Immediately on arrival she took off her shoe and used it to smash her cell windows and barricaded the door so effectively that the prison officers had great difficulty gaining access.  Writing to her parents with a real sense of ‘gallows’ humour in letters full of brio she remarks in one “I don’t even have to masticate my food let alone put it in my mouth, it’s a great saving on my teeth.  You better see … the plumber about laying in a few more yards of piping as I’m sure to be too lazy ever to feed myself again.

When she was freed after repeated imprisonment she was placed under the care of a Harley Street surgeon, his fees paid by Lady Lytton, a suffragette from the opposite end of the social scale to Selina.  Lytton proved that working class suffragettes were treated much worse in prison than those of her own aristocratic background.  To do so she deliberately incurred a jail sentence under an alias and was forcibly fed but swiftly freed once her true identity was discovered. In one of the letters she tells Selina “… I thought of you continually while ‘hospital’ treatment was being administered to me in prison”.

There is enormous interest in suffragette material as the centenary passes.  I do not believe this will decline because they continue to inspire those campaigning against 21st century inequality.  Of all suffragette memorabilia the medal is by far the most totemic object.  It is surely appropriate that this example, which until recently was the centrepiece of the exhibition Represent! Voices 100 Years On at the People’s History Museum, Manchester, will be sold in the city that is home to the National Justice Museum.  The medal and letters go on exhibition at The Auction House from Sunday 17 March