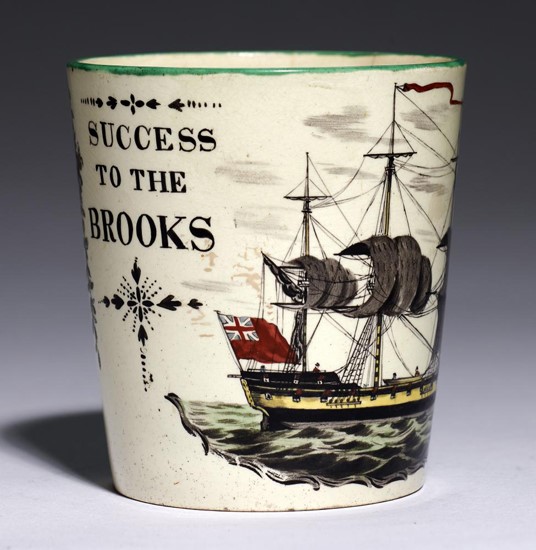 Just as history will chart in future years how in the 21st century passionate advocates from Greta Thunberg to Sir David Attenborough and Prince Charles alerted us to impending and calamitous environmental disaster, 200 years ago one issue above all was at boiling point: the slave trade.

In the 1790s, with romanticism and revolution in the air, conscientious men and women, many but far from all, members of The Society of Friends (Quakers) such as Granville Sharp, Thomas Clarkson and ex-slaver and writer of the hymn Amazing Grace John Newton campaigned tirelessly to end the evil ‘triangular’ trade in human cargo.  Recent research has revealed the important role of women and the small number of African abolitionists which had been largely overlooked by previous historians.

A small creamware beaker now at Mellors & Kirk was made in Liverpool in 1797.  It is hand painted in part and is decorated with a tinted transfer print of a frigate, the ‘Brooks’ on one side and a young woman in the guise of ‘Hope’ on the other, a common subject on maritime pottery when many sailing vessels were lost without trace.

It is also carefully painted with the inscription ‘Success to the Brooks’ and would have been specially made for a member of the owner’s family, or an associate, whose initials were ‘MEB’.  Extremely rare, no other example appears to be recorded.  The ‘triangular’ trade involved the shipment of countless thousands of Africans to a life of slavery in the sugar plantations of the West Indies.  The route by which they got there was known as the horrendous ‘Middle Passage’.  In this most shameful and degrading trade Britain led the world.  The ports of Liverpool and Bristol in particular owed their prosperity to slavery, whether directly or indirectly and many landowners, MPs and even men avowedly religious grew extremely rich from the profits to be made.

It was as if greed caused them to overlook the humanity of this ‘cargo’, which could be bought and sold, often at auction.

The abolitionists seized on two particularly shocking images.  One was the pottery medals of Josiah Wedgwood with a kneeling negro in chains and the catchphrase ‘Am I Not a Man and a Brother?’  The other was the engraving of slaves packed head-to-toe in the hold the ‘Brooks’, the vessel commemorated on the beaker.

It was an unexpected gift for the campaigners taken from a government report which showed that the small frigate, a cheaply built privateer carried 609 slaves from Africa to the Caribbean (far more than the authorised 450)  in addition to the crew of 45 seamen.  The passage took at least six weeks and conditions were appalling.

The vessel’s eponymous owner, Joseph Brooks Junior (1746-1827) was one of a prosperous Liverpool dynasty.  For him, not content with the rich pickings but risky business of a privateer – a privately armed warship authorised by the government to attack, plunder and seize foreign vessels – slave trading made good business sense.

Ten years before this beaker was made the leading abolitionist MP William Wilberforce took up the cause in which he eventually succeeded with the passing of the Act banning the slave trade throughout the British Empire, 20 years later in 1807.

It was not until 1833 that slavery itself was outlawed in Britain and most of its colonies in an Act of Parliament that was passed only three days before Wilberforce’s death.

The portrayal of the black man in early modern British and European culture was almost always negative with imaginary of  bogeyman,  monster, or else (rarely) the flawed hero (for example Shakespeare’s Othello) or as a ‘noble savage’, one untainted by civilisation.

Slavery continued for many years and remains prevalent around the world.  Wilberforce and his friends would be as active today in the dangerous work of exposing the hidden victims in plain sight – vulnerable trafficked people working in, for example, some nail bars, washing cars or cannabis houses.

That it has increased in Britain in the recent past is a worrying sign of the times, when a multi-cultural electorate faces a hard choice in next month’s election against a climate of political instability and isolationism.

Anti-slavery memorabilia and documents are very collectable, but rarer by far are those such as this which openly advocated the evil trade at the very time that the clamour for its abolition was at its height in Britain.

The activist organisation Historians Against Slavery.org seeks to show how history can be used to combat modern slavery in all its forms, amending slightly that emotive phrase “Am I still not a man and a brother?”