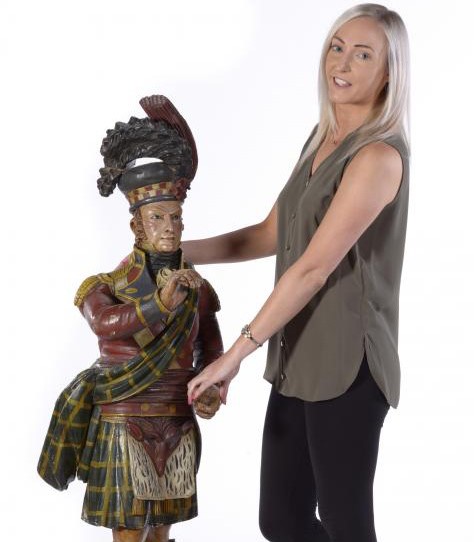 Players, Boots and Raleigh were world beating brands, in their day as recognisable as McDonalds’ symbolic golden arches.  They also acquired, largely accidentally, museum quality art and artefacts.  As several superb examples of 18th and 19th century tobacconists’ carved and painted wooden figures originally in John Players & Sons’ collection go under the hammer at The Auction House next month, what sort of society gave rise to amazing objects like these?

For around 200 years, from the late 17th century to the days of Charles Dickens’ London and even a little beyond, an important feature of many shops or businesses was a carved and painted hanging wooden shop sign or emblematic figure, intended to make the premises a landmark to a public that was largely illiterate.  Walking down York’s famously narrow Shambles one day, before it became packed with tourists, I could easily visualise how Bridlesmith Gate would have appeared in the mid-18th century, bristling with arresting brightly painted figures and signs over the doors and shops or, if smaller displayed in the bow window.  Most imaginative were the inn keepers and there were a great many of them in Nottingham, but about the only old trade signs that are still familiar today are that of the pawnbrokers, the three golden balls and the barbers’ red and white striped pole.

The earliest trade signs were large and highly ornamental wooden swinging signs, often very heavy and none to securely fixed.  Such was the menace they posed that after countless injuries and several fatalities they were banned in London in the mid-18th century, an early example of ‘Health and Safety’ that makes one smile as we weave our way around a multitude of city centre A-boards.

They were followed by even more impressive figures, akin to ships’ figureheads, some of which were life-sized.  Second only to drink was smoking and the tobacconists advertised their presence with a figure.  The earliest is the Black Boy which first appeared in the days of Charles II.  Highly unlife-like, clad in a crown and ‘kilt’ of brightly painted feathers they were supposed to represent a pot-bellied native of Guinea and these grotesque statuettes are prime examples of English folk art.  Now very rare, the best Players’ example is estimated at £1000-2000.  Other than mariners, practically no-one in Britain had seen an African at that period.  As an alternative, some tobacconists chose to depict an elaborately costumed Turk smoking a clay pipe.

Snuff taking was as prevalent as smoking and the kilted highlander taking a pinch from a snuff mull would have left no-one in doubt of the costly powder, in rows of jars arranged on shelves seen through the shop’s large window. These were especially popular in the 19th century.

Other trades, for example the apothecaries would have displayed a huge gilded wooden pestle and mortar.

On a macabre note a naked boy with or without a coffin would denote the undertakers’ premises, an awful reminder of infant mortality.  Hosiers often suspended a carved wooden human leg as did Bootmakers. The Glovers (does anyone still make gloves?) would hang out a hand and Hatters, mad or not, a beaver or other type of hat.  Drapers displayed a carving of a sheep or the golden fleece or the Indian Queen if they stocked imported eastern textiles.

To the art historian folk art is often thought beneath contempt being of no significance, but to the social historian and anyone with even a slight interest in the people and places of the past it evokes the colour of everyday life adding thereby to the  written records such as diaries. Being in three dimensions, yet not a sculpture and different again to a sketch or a painting, they can be very appealing.  The expression on the face of the tobacconist’s Scotsman from Players is quite striking, especially so as he is virtually three quarters life-sized.  In 2014 Tate Britain staged the first major exhibition devoted to British folk art where trade signs such as these, ships’ figureheads and the many other weird and wonderful objects on display had lost none of their power to grab attention.  If ever there was public art with a purpose this was it.

Bridlesmith Gate and streets like it, in the heart of our towns and cities increasingly have empty shops.  Only last week new competition was blamed for plunging profits at the home grown, Notts based Wilko chain which caused shock and concern for many.  Change and in particular the domination of online commerce means the bland high street, full of chain stores is an anachronism.  Colourful, picturesque trade signs such as these enticed people into distinctive, original shops staffed by interesting and no doubt sometimes eccentric individuals, in the same way as the colour and spectacle of Goose Fair never fails to pull in the crowds.  Do signs from a bygone age have a message for us, pointing the way to a different future for our town centres, one where people actually want to spend time – as they do in York - and not merely use them to rush between one soulless mall and another?