When the Beatles came to Nottingham 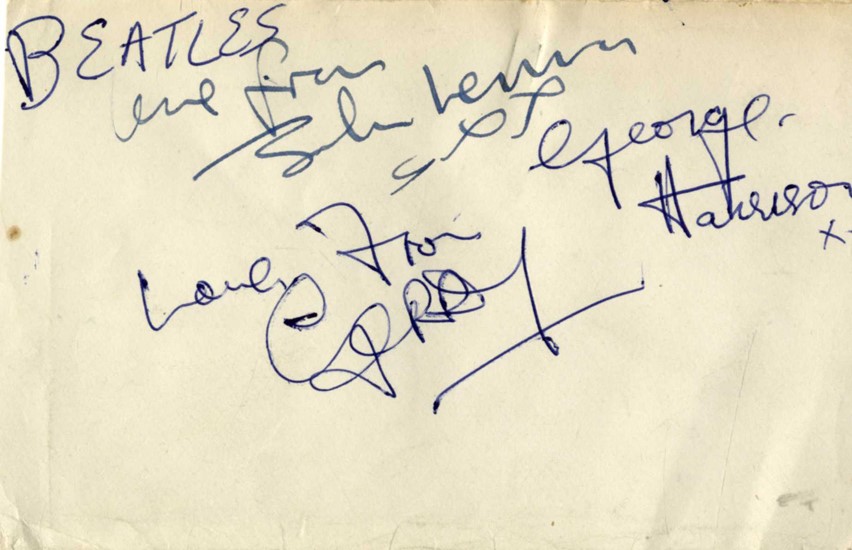 Do you remember 1963?  Most people that can would rather not.  It wasn’t a good year, the news was consistently bad and the Cold War was at its coldest, as was the weather.  It was the worst winter for 200 years with months on end of ice and snow and even colder than in 1947.

One Nottingham lady I met recently has a good reason to remember this bleak winter.  Kathleen, or Kate to her friends was a 20 year old Beeston girl in 1963 and on Thursday, March 7th saw the Beatles up close at the first of the band’s four visits to Nottingham.  What’s more, she got them to sign their autographs for her album.  The autographs go under the hammer at Mellors & Kirk on 4 October and are estimated at £1000-1500.

Gerry Marsden of Gerry and the Pacemakers fame has signed the same piece.  The Nottingham event was the first of manager Brian Epstein’s six ‘Mersey Beat Showcase’ concerts at different venues, which also featured Billy J Kramer and the Dakotas, the Big Three and Cilla Black.

Most recently Mellors & Kirk sold all four Beatles signatures obtained by a former worker at the Old England Inn on the A1 where the band stopped en route for a late night supper.  She nipped out of the kitchen and got their signatures on a scrap of paper for which we obtained £2,500 from an American collector.  Beatles memorabilia commands high prices at auction as people want to own something directly connected with the most influential pop musicians in living memory.  Ringo’s own copy of the Parlophone Beatles album of 1968 sold for $790,000 in 2015 and a Sergeant Pepper Lonely Hearts Club Band LP signed by the Beatles sold at auction for the equivalent of £190,000 in 2013.

That sort of money would have been unthought-of in March 1963 when the band had to unload their own equipment from a van when they arrived at the Nottingham venue, the Elizabethan Ballroom on the top floor of the Co-Op in Upper Parliament Street.  Amazingly, on the night the room was apparently only half full.

It was to be a very different story on the Beatles three other visits to Nottingham later in 1963 and early 1964.  On May 23rd they were at the Odeon sharing the billing with Roy Orbison and on December 12th returned to a tumultuous reception from thousands of ecstatic young fans.  All police leave in the city was cancelled and a fleet of ambulances were put on standby.

Kate has treasured her memento of that historic night for 54 years but isn’t sad to part with it because somebody else will treasure it.  It goes to show that its often the objects acquired without the least thought for future profit that turn out to be the best investments.

John, Paul, George and Ringo have attained a sort of immortality that only artists with something unique can.  There is something so new and appealing yet sweet and sentimental about the lyrics and music which changed the way a new, post-war generation of baby boomers woke up to music.  And didn’t they look great, those four nice ordinary boys from Liverpool, apparently so similar but very different personalities, full of charisma and talent.  That’s why the young and the young at heart really got ‘Beatlemania’.

Liverpool, the Beatles’ spiritual home is a place of pilgrimage with visitors heading for the Cavern Club and the childhood homes of Lennon and McCartney, both of which are now owned by the National Trust, which describes the latter property as “a small house with huge musical significance”.  When John Lennon and Paul McCartney dreamt up “Ticket to Ride” they can hardly have thought it would be to their own childhood homes!

It is extraordinary how each generation discovers the Beatles and ‘Beatles heritage’ is big business because the songs seem timeless, appealing to young and old alike.  The buyer of Kate’s album is just as likely to be a Beatle maniac who always wanted their autographs as what is usually thought of as a collector, which makes these particularly unusual ‘collectables’.